Tell Me Something Good 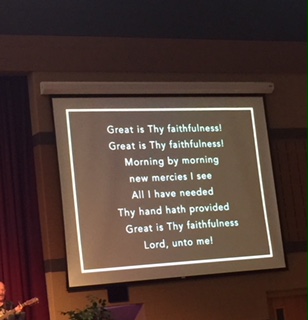 $833,000—the fee (I had other words for it) to break away from a denomination that was taking a path most of our congregation did not wish to travel.

Less that a year to come up with it. That is not a lot of time.

Money and Politics—inescapable even at church—brought back a vivid childhood image from an old family Bible of Jesus angrily turning over the table of the moneychangers at the temple.  That story held a much deeper meaning for me as our church story had unfolded over a tortuous past two years.

This past Sunday was the day.

Committed to successfully taking the church in a new direction, today’s Sunday message was to launch our financial backing as a congregation.   A scheduled baptism and handing out First Bibles to a group of children that had reached a church milestone began the morning service.  A timely launch to the aptly named “Fresh Start Campaign”, these children were also freshly starting their own Walk. No matter what the result of our collective financial efforts might bring, they  had begun a new chapter as part of our CPC church family.

Pledge cards had been handed out, the math done for us.  Pencils and phone calculators could be seen in use throughout the heartfelt messages of our Pastor and also as a church member who himself had experienced a similar painfully long and expensive church break away.

Now it was time to Make It Happen….for those that wanted to and were able to look ahead, dig deep and drop our pledges into prepared boxes.  Testing our Faith.  Taking the Leap. To see how far we had to go, a starting point had to be established and announced.   Church leadership had been working tirelessly to obtain foundational pledges to get the seeds of the Fresh Start planted.

Our Pastor could not hold back his tears…and neither could many of the packed congregation as the announcement was made and the Fresh Start launch number shown on the sanctuary screens for all to see.

Come be part of the Fresh Start at Centreville Pres.  Worship with us each Sunday at 10am.